Financial excellence for the corporation at large

Interview with our CFO who from Panama tells us how his career development and personal experience are reflected in his professional performance.

More than twenty years of experience can be mentioned easily. However, this is exactly what Juan Enrique Leon, our Chief Financial Officer brings; a complete career path highlighted by his participation in negotiations during two important business acquisition processes as the one that the company is currently conducting to merge with the DAIKIN group.

The first time he had the opportunity to experience a negotiation process to acquire a company was when he was 23-years old, with a recent degree in Business Administration. In 1993, during his internship in a cement corporation, the company was sold and though at that time his responsibilities were limited, he admits learning a lot from this event, it was beneficial for his professional career according to his university professors.
But another event marked his trajectory in this company when the government of Venezuela, his country of origin, expropriated it. Even though he was transferred to the sister company in Puerto Rico, he made the decision to pursue new endeavors a year later. In this way our CFO arrived in Panama, a country experiencing rapid growth.
There, he started as a Regional Controller of an “Engineering, Procurement and Construction (EPC)” company, specialized in the energetic sector, where after three years he again had the opportunity to participate in another business acquisition. The relocation of the corporation headquarters to the city of Bogota was about to happen, since the company was now part of an investment funds Colombian group, but he declined the offer to transfer. In this opportunity, his performance as well as his learning experience were greater: one learn to face difficult situations and make decisions quickly, good or bad, and one learn to value a thousand things, concerning your professional and personal endeavors, he remembers.
After working for several companies of different types for the following two years, finally he arrives to SAEG in July 2014 to manage the finances of the recently created corporation. Today, he brings to light all his experience moving forward to reaching the goals set forth to complete our merge with DAIKIN. He admits that he works with more enthusiasm to deal with this challenge, since he considers that the change is going to be interesting and very positive for all of us. Without hesitation, he confesses that there are many growth opportunities, the challenge is to understand where we are heading, rethink what you want and cope with it.

Juan Enrique León, or better to say, Juan Enrique Felipe León Gómez, was born in May 26, 1971 and was baptized with three names: the first name, his given name; the middle name after, his father and the third name, as a reference to the Catholic saint honored the day he born. The story of this structured and methodic man starts in a middle-class family as any other, being the middle child of five siblings who discovered early in his life that he had a gift for finances. 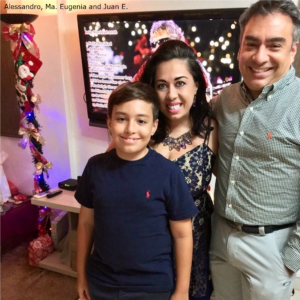 He was He When he was only 7-years old, his uncle gave him some motorcycle stickers and at school he discovered that the children liked them a lot, so he decided to sell them. At that stage of his life, he learned about the value of money and was aware of the importance of saving money. Years later, when he was 12-years old, he wanted a trendy bicycle but his parents could not afford it. He worked two months during school vacations but still needed half of the amount. With a little of luck and a lot of determination, he gets it soon. The husband of Maria Eugenia and father of Alessandro continued to discover the power of planning to reach any goal in life.
But behind the CFO position is the essence of a man that continues to be the child who played baseball on the street with his friends. A sports lover (especially golf, has a handicap 5), fan of the German football team and a Star Wars collectionist, among other hobbies, he still remembers when he used to build air modeling aircrafts with his father and his brother. The SAEG-DAIKIN merge is under good hands.