Commercial ties between SAEG Dominicana and Nestlé are consolidated 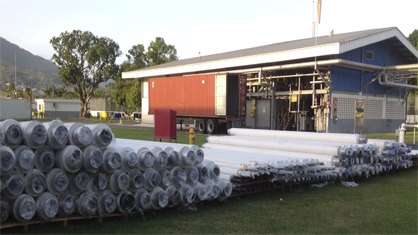 The ammonia plant project in Nestlé Trinidad and Tobago reinforces the close commercial relationship between these companies, which extends to other islands in the Caribbean.

SAEG Dominicana has been selected by NESTLÉ for the design, supply and installation of an ammonia-based refrigeration system that will produce some 2,600 KW cold water refrigerators at 0.5 ° C at its plant located in Valsayn, Trinidad and Tobago, as well as the civil construction of a cistern that will be a store or lung of water in constant reserve during the process.
Alexis Cabrera, Project Manager, informs us that this refrigeration system is of the flooded type and is composed of 2 compressors, a suction accumulator, 2 evaporative condensers, 2 Film Chiller type evaporators and a set of pumps coupled to a distribution network . Likewise, a new set of pipes is planned to interconnect these facilities with the production plant.
Ammonia is a much more ecological alternative to its synthetic counterparts, because it does not destroy the ozone layer and does not contribute to the greenhouse effect associated with global warming. This makes it consistent with international agreements on these matters. This new collaboration between SAEG Dominicana and NESTLÉ is in full development stage and delivery is scheduled for early September 2015.
Eng. Cabrera also tells us that SAEG Dominican Republic has worked in all the local NESTLÉ plants, specifically, in San Francisco de Macorís and San Cristóbal, where they built the refrigeration plant, the fire protection system, the generation system of cold water, the supply network to the evaporating machine, air conditioning and ventilation system in the warehouses.
“A project of this nature, abroad and before a company like NESTLÉ, with highly demanding codes in terms of security, implementation and standards for each of its facilities, allows us to transmit trust and credibility with our clients. At the same time, it is one more example of our solid relationship, which began in the plants in the Dominican Republic, and has spread to other islands in the Caribbean, ”Cabrera concludes.