Nuclear Energy at the service of health 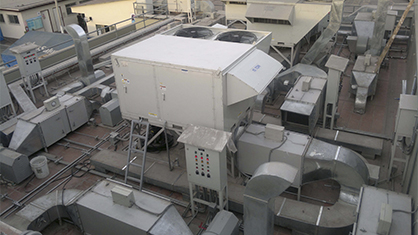 A new success for SAEG Peru by supplying a HVAC system and monitoring remote control for the cyclotron of the Hospital Luis Negreiros – first in a government institution – to conduct high definition tomography studies.

Thanks to the participation of SAEG Peru in the development of the HVAC system and remote monitoring control, the Hospital Luis Negreiros, located in the Callao province, already has the first public cyclotron of the country. This last generation equipment permits performing very precise tomography studies for early diagnosis of oncological, neurological and cardiological diseases.

The positron emission tomography is a nuclear medicine test that is done with a PET scan and consists of inoculating radioactive substances also known as radiopharmaceutical or radiotracers, produced by the cyclotron.

Diego Guerrero de Luna, project leader, explained that the building climate control consists of 100% dedicated outside air conditioning systems, handling positive and negative pressures, depending on the environment and included are high level filters for both air intake and exhaust air.

“The climate control systems rely on units, special roof packages and a water cooling system (chiller) designed only for a specific cyclotron environment. Besides, there is general ventilation in the whole building with repetitions in some settings because of the critical handling of pressures” clarifies Guerrero de Luna.

Furthermore, the building was equipped with a remote control and monitoring system from a control station operated by responsible institutions. Also, the electric power facilities were supplied for all the equipment.

Since 2009 there is a private cyclotron in Peru, but this is the first government installation that was inaugurated in January 2015 with the participation of authorities of the Instituto Peruano de Energía Nuclear (IPEN), the Seguro Social de Salud del Perú (EsSalud) and the current President of the Republic, Mr. Ollanta Humala.

According to the words of the head engineer and due to the nature of equipment that generates electromagnetic radiation, the major challenge was to work with the government as the final user and to have General Electric as client. The attention level and technical support were very demanding from both parties.

With the participation in this type of projects SAEG Peru continues to demonstrate a strong social commitment that without any doubt, will contribute to the development of the health and hospital sectors of the Peruvian citizens